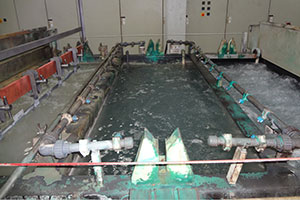 SPANGLER – the Plus of Flexibility.

Modernising a manufacturing process whilst the production is running is always a challenging task. SPANGLER Automation accomplished such a project for Knorr-Bremse AG, an internationally-active manufacturer of brake systems for rail and commercial vehicles.

Simulation prior to commissioning

A galvanisation control system was comprehensively modernised at the Lower Bavarian location of Aldersbach, to the west of Passau. “After an initial assessment, we planned, programmed and built a new switchgear system”, says one of the SPANGLER Project Managers. “Initially, we operated the new system in parallel with the old one, so that we could commission the new system without interrupting production.” The control system specialists saved additional time through a combination of simulation and commissioning. Every new software was first simulated in Töging, prior to being installed in Aldersbach. The new software was gradually introduced on three weekdays; over the remaining time, each respective subsequent step was prepared and tested. As a result, operating personnel could be trained in advance for the new system.

Conversion work during the holiday period

In this case, electroplating technology is used to anodize aluminium components using a submersion process. Over the course of this process, the parts pass through 26 baths with the aid of a transportation system. The SPANGLER team utilised the holiday period between Christmas and New Year in order to complete the last major reconnections to the new control system.

In addition to operation and visualisation, the control system used by SPANGLER also provides a connection to a database for the exchange of production data with the customer ERP. The manufactured parts are recorded using barcode scanners and combined with a stored recipe from the integrated recipe management. The individual steps are implemented at the push of a button. Furthermore, the system synchronises itself in order to avoid idle times.