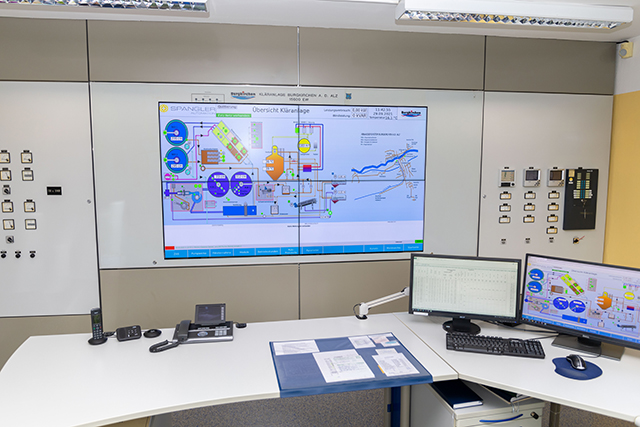 SPANGLER – the Plus of overview.

Spangler Automation has supported the Upper Bavarian municipality Burgkirchen on the Alz with the expansion and modernisation of its sewage treatment plant for more than 20 years. The latest project was about the exchange of the mimic diagram for the control of the plant stations by a video wall consisting of four LED screens. “With the existing static execution, new plants such as a combined heat and power plant or a sludge dewatering plant, cannot be added anymore “, Martin Müller, Sales Manager, reports.

To comply with the limit values for a high water quality, the operator must identify critical plant conditions as early as possible and correct faults immediately. For a fast and reliable fault reporting, a clear presentation of the plant technology and thus of all processes is essential. In Burgkirchen this has been done so far via an aluminium plate with foil printing that has represented the circuit diagram and via small lamps in traffic light colours which has shown faults in the system.

This mimic diagram is established and has been common for a long time, the presentation of the plant, however, was inflexible. For this reason, it was now replaced in Burgkirchen by a video wall with a size of 410 x 232 cm, which is dynamically alterable and thus applicable on a long-term basis. It switches on in the presence of the sewage works operators and immediately visualizes the current operating conditions and possible faults. If required, it is even possible to switch from the control system to the video surveillance of the premises. Thanks to LED screens and a targeted operation, the energy consumption is negligible.

The video wall exists of four 46-inch LED screens, which were mounted on a rail construction and recessed in the wall of the operation building. Using the existing constructions for mounting the new technology, the installation costs turned out to be very cost-effective. A PC system programmed by Spangler, consisting of a main computer and four small PCs, now clearly displays the control system and links the four screens into one large display. The complete hardware as well was hidden in the wall, however, is easily accessible.

“For planning, programming, assembly and start-up we needed just one week”, says Martin Müller. It is no wonder that such an optimisation also found favour with other customers and will be installed there soon.