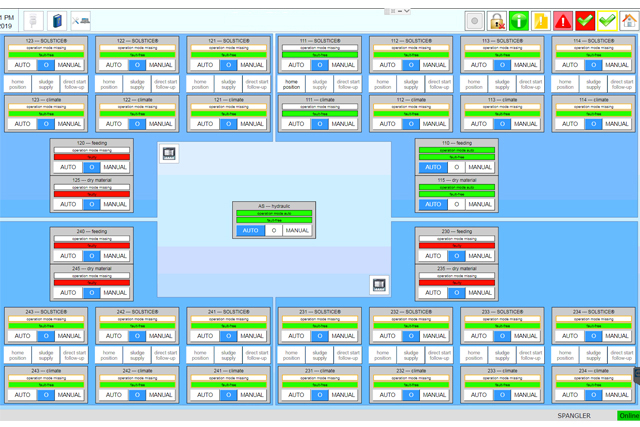 Spangler – the Plus of Networking.

In many countries of the world sewage sludge is often used as fertiliser on fields. Meanwhile, sewage sludge is not only used as a waste product but also as energy source for recycling plants (e.g. incineration plants). The world’s largest solar drying plant for sewage sludge is currently established in Egypt. Liquid is withdrawn from the sludge by solar energy to compress it. Thereby, solids can be better transported and the odour nuisance during storage is reduced.

Energy-efficient and natural
Solar radiation in Egypt is used so that the drying of the sludge from the upstream wastewater treatment plant can be proceeded energy-efficiently and without additional energy input. The sludge is distributed by screw conveyors in more than a hundred greenhouses with each 100m x 100m. Huber Solstice sludge turners collect the material and turn it several times. Ventilators support the sludge drying with a special Spangler air-conditioning control. Afterwards, the result is loaded in containers. Spangler has programmed a SCADA system group which comprehensively controls this process automatically so that it works smoothly with all 128 sludge turners, 224 screw conveyors and 1152 ventilators.

The power of the sun, controlled by PLC
The dimension of the control technology with a total of 192 control cabinets and 64 sub-distribution boxes is just as impressive as the controlled plants. The control unit was implemented on eight independent process control systems installed by Spangler.

Overall, the project in Egypt was a logistical challenge as at no time the entire plant could be assembled in Töging for tests. The software was tested comprehensively prior to delivery. Several Spangler programmers, controllers from final inspection and customer representatives thoroughly checked the quality of the plant in Töging over a few days during a FAT programme.