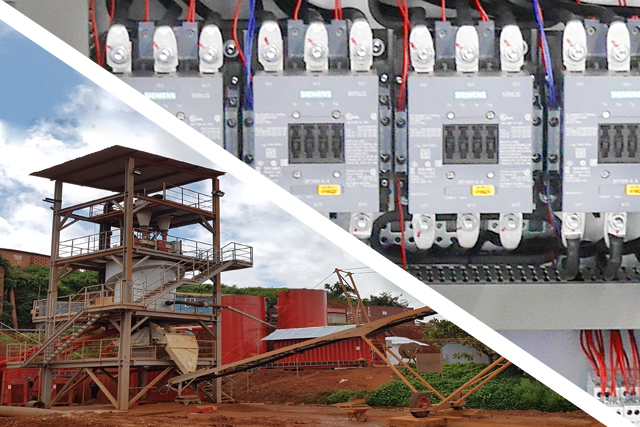 SPANGLER – the Plus of Raw material extraction.

Bauxit is an ore which is primarily used as raw material for the aluminium manufacturing. The ore can be found in low to strong concentration almost worldwide and is often mined in open-cast mines. Main producers are Australia and China; due to increasing demand, however, mining is now also economical in African countries. Bauxit is extracted from sand and soil by water erosion, filtering and drying.

Spangler was commissioned to realise the automation for two Bauxit mining plants from the company AKW Apparate und Verfahren GmbH located in Hirschau. The company which has been working together with Spangler for more than ten years required an individual control solution for the open-cast mining in Sierra Leone in West Africa.

The project demanded two individual solutions as for one plant the feeding already existed and only the sifting technology was retrofitted. The second plant had to be redesigned completely.

Spangler carried out the entire engineering, the control system construction, the software creation, the supervision of the installation and the start-up. The heavy mechanics of the conveyor and pumping technology which must handle the massive sludge-water mixture required a lot of attention. Spangler manufactured three control cabinets for each of both plants with Siemens S7 PLC which are operated by Siemens TP 900 comfort touch panels. Battery-backed power supplies are installed for the bypass of voltage fluctuations. The plants operate with a voltage input of 400 ampere or rather 320 ampere.

The open-cast mining is located in a sparsely inhabited area, six hours away from Freetown, the capital of Sierra Leone. For the demanding transport by sea and via unpaved roads the Spangler team managed the complex seaworthy packing of the control cabinets. Two employees were on site as supervisors nearly four weeks where they planned and monitored the installation and start-up together with the plant operators. Thereby, special attention was given to the robust and reliable technology which should be operated stable due to the remote location of the mining area.