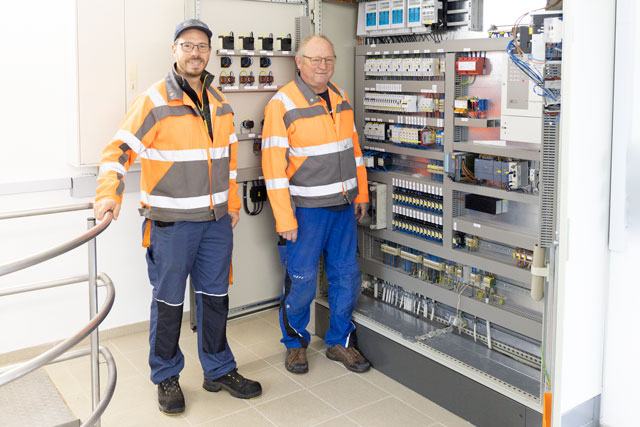 SPANGLER – the Plus in the Homeland.

17 pump stations are connected to the canal system of Dietfurt an der Altmühl, which convey the local waste water to the sewage treatment plant. With the aim to monitor it centrally and automated, SPANGLER Automation has retrofitted the large remote maintenance system of the home community and implemented it into the existing control system of the sewage treatment plant. This guarantees continuous individual monitoring based on measured values, data and possible fault messages.

More than 6.000 inhabitants in 37 urban districts are connected to the canal system of the town Dietfurt an der Altmühl, including Spangler. 17 pump stations convey the local waste water to the sewage treatment plant, where it is cleaned and treated and returned to the water cycle. As the pump stations cannot be controlled every day, a warning and a data transfer system was required. SPANGLER Automation was commissioned by the city of Dietfurt to take over the project work and implementation; in 2008 it has already implemented the control system of FlowChief in the sewage treatment plant. Since then, step by step every pump station was retrofitted with a Siemens S7 1214C control system and a remote maintenance modem for data transfer and was connected to the control system by LTE remote communication. The conversion of the technology was carried out during operation and included, besides the retrofit of the current measurement, the expansion of the operating mode switches. Furthermore, the order also included deactivating of the existing fault message system via landline and activation of the new LTE remote communication. The whole alarm system technology is now maintained – fail-proof – via a battery buffered voltage supply.

Monitoring of the waste water system

All measured values and data, like levels, operating hours of the fault messages are transferred to the central PC of the sewage treatment plant, registered and shown, clearly arranged and intuitively operable, via a Spangler visualisation. In addition to that, a power monitoring of the pumps provided information about power consumption and the mechanical state of the pump wheels. To be in a position to immediately react and in order not to lose time with driving to the stations, every pump can be switched on and off via remote control in the central at the touch of a button.

The sewage treatment plant Dietfurt now profits from a quicker recognition and thus a quicker removal of possible faults, a consistent monitoring of the data and a long-term secured supply of spare parts. Spangler is very proud to be able to support their own home community in this way.