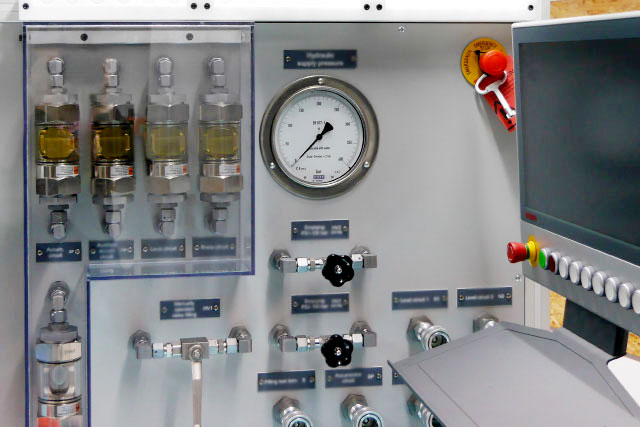 SPANGLER – the Plus of Safety.

As basic safety components brake systems require regular testing. The company Knorr Bremse AG is one of the leading international manufacturers of brake systems for rail and utility vehicles. The US subsidiary of the group, the Knorr Brake Company, has now installed a hydro device test stand which systematically checks the brake systems of rail vehicles.

SPANGLER planned the electrical part of the test stand according to the American Standard UL508A and manufactured the necessary control technology. This standard regulates the entire production process for the control cabinet construction for the sector of the North American market. All brake systems manufactured by Knorr can be checked on the test stand.

The planning and adjustment of the test stand to the American framework conditions was a special challenge for all people involved. This means that among other things special adapters had to be installed upstream in order to be able to connect the American systems. Knorr Bremse had to adjust certain mechanical and hydraulic components to country-specific requirements.

As a special feature SPANGLER has isolated the plant control’s power supply of the remaining supply network of the site via a separating system so that the hydro device test stand is controlled via its own IT network. By using high-performance laboratory power supply units and the direct access to the test stand, particular attention had to be paid to protection of the staff. Therefore, an important measure was the use of an insulation monitor and consequently the potential separation of the circuits.

SPANGLER has assumed the integration of the mechanical and hydraulic components with the control technology. “We have carried out the so-called wedding at our production site in Töging and thoroughly examined the test stand so that the start-up in the USA proceeds as smoothly as possible,” Project Manager Anton Höcker reports.