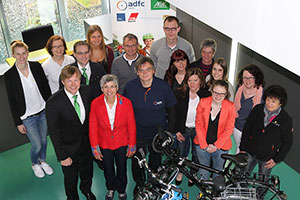 Cycle to work: already starting in May

The cycling season begins and hence the event “Cycle to work”. This year the starting signal takes place at the company SPANGLER in Töging. The company has 130 employees of which a group of about 20 colleagues regularly participates in the AOK-event for years.

Managing Director Hannelore Spangler is a keen mountain biker herself and fully behind it: “As head of the company I support the event as it promotes the well-being of my employees.” The join-in campaign runs from 1 May until 31 August. As of now, all enthusiastic bikers can register online on www.mit-dem-rad-zur-arbeit.de for the joint event carried out by AOK and ADFC (General German Cycling Club). “We have extended the period of the event by one whole month from this year onwards”, Gerhard Lindner, AOK Director in Neumarkt, explains. The participants now have more working days to achieve the event’s target. They should cycle to work on at least 20 days. “And if the surrounding is as beautiful as it is here in the Altmühltal, it is much easier to get on your bike,” Lindner adds. The Altmühltal belongs to the most popular holiday regions in South Germany and is a perfect place for cyclists. “Also commuters can participate in the event as it is already evaluated if you cycle to the train station or the commuter car park,” Rainer Zimmermann from ADFC Neumarkt explained.

Little effort, much fitness
Just half an hour of physical activity per day is enough to improve your own fitness. It is best to integrate the activity into everyday life. Cycling to work is particularly suitable for it. Silvia Tengler who leads the SPANGLER fitness program thinks: “This event perfectly fits into our SPANGLER fitness program. Physical activity leads to more quality of life, fitness and health. Biking within the team additionally motivates.” Besides the positive impact on your own fitness, the event offers an additional incentive to participate: Anyone who maintains the event calendar with his “cycling days” online on www.mit-dem-rad-zur-arbeit.de or submits it to the AOK until 19 September has the chance to win one of many sponsored prizes which are raffled among the successful participants every year. First prizes are holiday trips worth around 5,000 euros. The prizes are donated by companies and are not financed from contributions.

Anyone who wants to take part should preferably join together with his colleagues to a team with up to four people. Larger companies can of course register several teams. If there is no team taking part, individual cyclists can also participate. “Also within the team every participant cycles his own distance,” Lindner says. Anyone who prefers to mark his “cycling days” with a cross by hand receives the event calendar from his coordinator in the company or from every AOK office. About 50,000 people from more than 9,000 companies in Bavaria alone joint the environmentally friendly and healthy AOK-ADFC joint action last year, nationwide it was around 150,000. From the district Neumarkt i.d.OPf. over 600 employed people from 120 companies took part.

Melanie Huml, Bavaria’s Minister of Health, again takes over the patronage. The DGB of Bavaria (German Union Association) and the vbw e.V. – Bavarian Business Association support the joint initiative of ADFC and AOK in the Free State of Bavaria. Both partners are involved right from the beginning. The vbw e.V. provides financial support to the initiative.