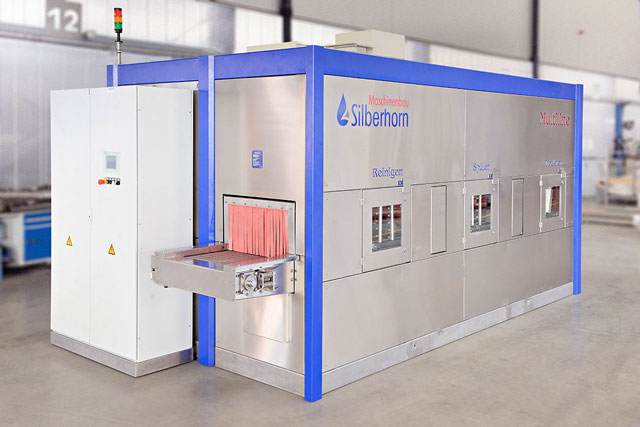 www.SPANGLER – the Plus of Precision.

No matter if burrs on motor and housing parts or residues of lubricants and coolants – in motor manufacturing precision and cleanliness are the most important things. The company Maschinenbau Silberhorn GmbH located in Lupburg is an international specialist for plants designed for cleaning and deburring machine parts. In the middle of this year Maschinenbau Silberhorn GmbH delivered two complete cleaning lines for an automotive plant in Shenyang, China. SPANGLER Automation was responsible for the electrical planning and control cabinet construction and provided support during the installation and start-up of the control technology both in Germany and on site in China.

In total, three robot cells deburr motor parts with a water pressure of up to 600 bar. About 500 parts run through both lines per day. They are cleaned of residues from the mechanical processing with various cleaning agents as well as preserved at the same time. Afterwards the treated parts are returned to manufacturing or transported to an interim storage.

According to OEM’s preference

A special challenge was the variety and complexity of the plant processes which had to be considered when programming the control. Furthermore, due to the specification sheets of the car manufacturer detailed requirements for control technology and programming had to be taken into account. Again, SPANGLER could actively support Maschinenbau Silberhorn GmbH here and hence contribute to a smooth implementation of the project.