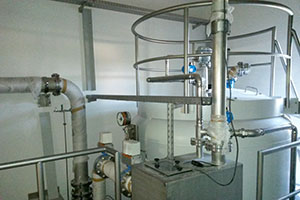 SPANGLER – the Plus of Quality.

The Jachenhausen Group is an administration union which supplies drinking water to around 15,000 residents in the administrative districts of Lower Bavaria, Upper Bavaria and Upper Palatinate. At the end of 2015, the association expanded their Ihrlerstein waterworks and equipped it with an activated carbon filter system which frees drinking water from foreign matter such as dust, heavy metals or interfering chemicals.

SPANGLER Automation has designed, built and installed automation technology within the scope of this project in Ihrlerstein and at two other locations belonging to the Jachenhausen Group. The Ihrlerstein location has been equipped with an activated carbon filter system; at the Haid location, the administration union has also built an elevated tank, and two well sites have been retrofitted with measuring equipment for pH-values.

Furthermore, SPANGLER has programmed and implemented the control software, and coordinated its visualisation with the existing control system. The company has installed and commissioned measuring and control technology at all these locations. The retrofitting and expansion of the systems has taken almost eleven months, and all adaptations were completed by the beginning of December 2015. Both partners benefitted from their longstanding cooperation in this project: “We have known the systems concerned since 1998, and were able to complete our work without time-consuming orientation periods,” says Franz Achhammer, key-account sales department at SPANGLER.