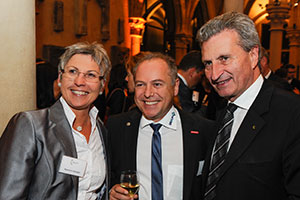 Hannelore Spangler as envoy in the European Parliament of Enterprises

Dietfurt/Töging, 18 October 2016 – On 12 and 13 October German companies had the opportunity to present their region and sector in the European Parliament and deal with politically relevant issues. This year Hannelore Spangler, the entrepreneur from Dietfurt, was a member of the delegation which travelled to Brussels on behalf of the Chamber of Crafts of Lower Bavaria/Upper Palatinate. 96 German entrepreneurs in total took part in the “European Parliament of Enterprises”, twelve of them were from Bavaria.

The parliamentary evening on 12 October as well as the contribution in the European Parliament provided a good platform for an international exchange. The debates in the European Parliament of Enterprises dealt with the following four topics: trade policy, the single market, sustainability and education. Hannelore Spangler meticulously prepared herself for all issues “as the political stage and those topics are too important to me”. Especially the single market and education are matters close to Hannelore Spangler’s heart: “The European Single Market is the engine of the German export economy; we generate significantly more than half of our export proceeds there. The matter of education is a livelihood for both the companies and the society for which the German training models have plenty to offer”.

Hannelore Spangler was visibly impressed by the complexity which is behind this highest European committee, the variety of connections and the complex process which the 28 countries have to take again and again in order to find compromises and also vote in terms of their national economy. Clearly voting for Europe, Hannelore Spangler, the internationally active Managing Director, says: “The results so far show how complicated the processes are and also demonstrate the importance of those efforts”.

SPANGLER GMBH employs around 130 people at its headquarters in Töging in the Altmühl valley and has been a reliable partner of the national and international mechanical and plant engineering for 35 years. More than half of the plants produced are exported worldwide.
SPANGLER Automation engineers and plans the plant automation, programs the control technology and manufactures the switch and control systems for various sectors such as environmental technology, agricultural economy, building industry, food industry, automobile industry, raw materials industry and pharmaceutical industry. Moreover, SPANGLER carries out the start-up as well as the after-sales service of the plants.

Hannelore Spangler together with Georg Braun in the European Parliament of Enterprises (1,1 mb)