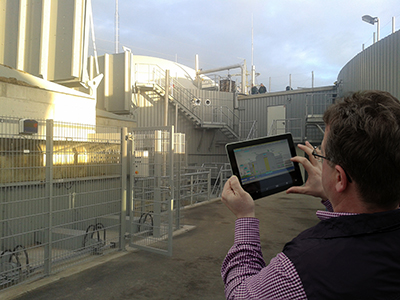 SPANGLER – the Plus of the Future.

In a record period of seven months (May to December 2014), SPANGLER achieved the automation of a new biogas plant in Dessau – from detailed engineering to SPS programming, control system creation, production, complete installation and finally commissioning. In addition to the planning and project development of twelve switchgears, the scope of services included the construction of cable lines, as well as the laying of 22 kilometres of cables for measurement data and for power supply.

The core of the automation is the software that is customised for the production of biogas. For process monitoring, SPANGLER used the Siemens WinCC control system , which visualises the operation of the entire plant. A special detail: in addition to the conventional computer, the plant can also be controlled via WLAN with the help of a tablet PC.

The biogas plant made by UTS processes around 60000 tonnes maize, grass silage, sugar beets and chicken litterper year. The produced methane is mainly fed into the natural gas grid (700 Nm³/h bio methane through gas water washers) and a smaller part is converted to electrical power and thermal energy on site (550 kW el via a block-type thermal power station).

The ambitious schedule has spurred the project team on to outstanding achievements. “Not least due to our dedication was our customer once again able to finish the project well within the ambitious schedule,” the Sales Manager at SPANGLER, Franz Achhammer, looks back at the project. He and the team were then all the more delighted to receive a letter from their client UTS: “this is a great success for the entire project team, including the subcontractors. Thank you for your tireless efforts.”