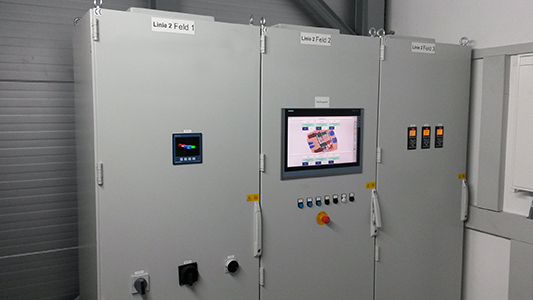 SPANGLER – the Plus of Sustainability.

In the past year, the city of Frankfurt has added a treatment plant for sewage sand to one of its waste water treatment plants in the Niederrad district. SPANGLER Automation designed and installed the switchgears for this, as well as the lighting and monitoring system. The new plant was put into operation at the end of 2014.

The task of the treatment plant is to process the mass of the sewage sand provided and to put the purified sand back into the cycle of resources as a recycling mass. To this end, sand and other coarse substances or impurities are separated from one another in a variety of washing processes. The whole system is designed in two lines, which can be operated independently from one another.

The SPANGLER switchgears control the two lines for the delivery of the sewage sand, as well as the pump station, which transports around 70 m3 of wash water per hour for the plant. Two Siemens S7-315-2DP CPUs are used as automation hardware; visualisation takes place for each line via a 22 inch comfort panel TP 2200. A striking example of the high customer focus of SPANGLER is the connection to an existing control system: “A Phoenix SHDSL modem changes the frequency of the signals, allowing distances of up to 20 kilometres to be bridged via existing copper wires,” explains project manager Daniel Götz.

SPANGLER’s many years of experience with such requirements also stood it in good stead for the design and realisation of explosion-proof lighting. The explosion-proof light fittings ensure that it is not dark in the 90 squaremetres hall, even in the event of a gas alarm.